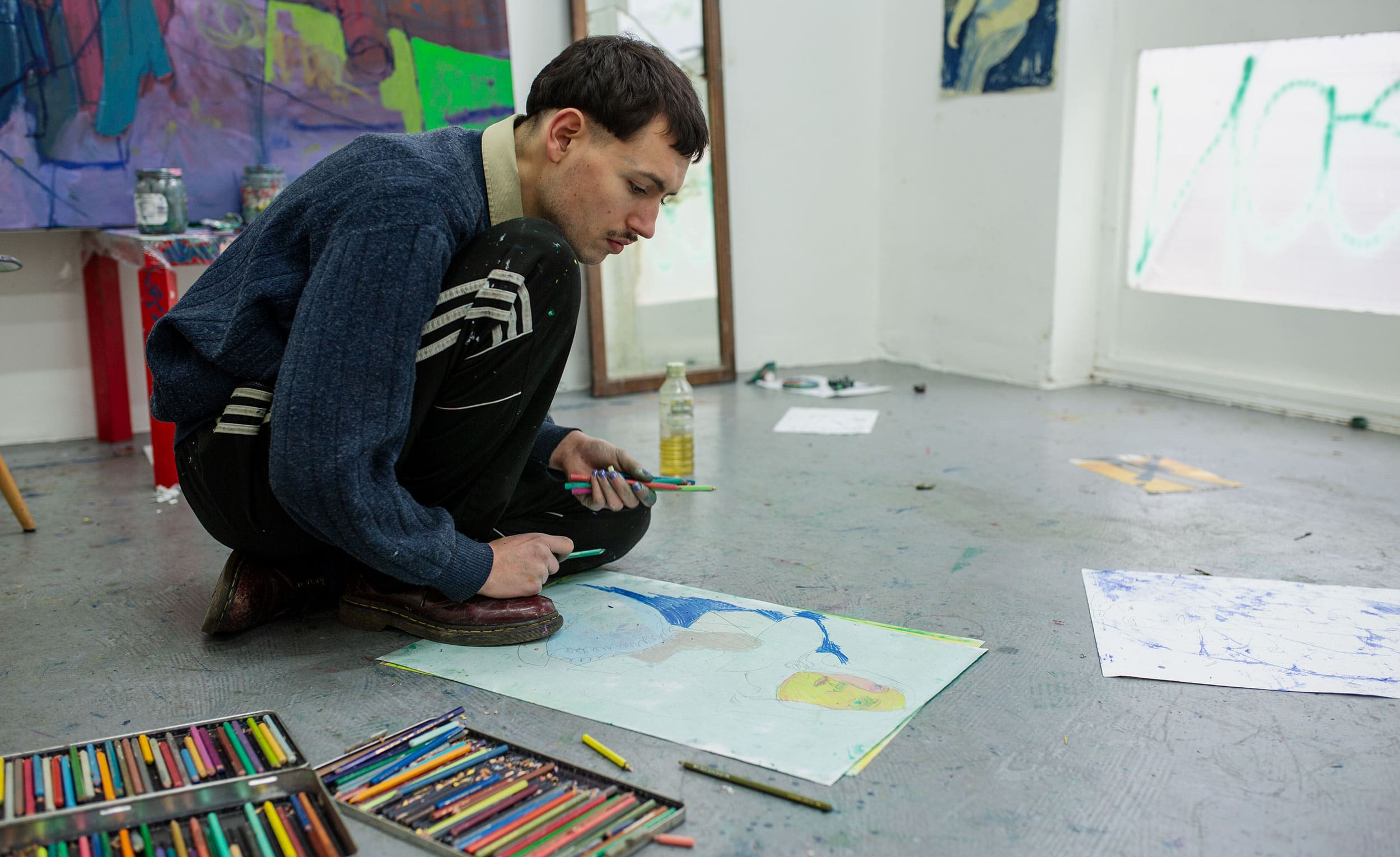 Igor Moritz (B. 1996, Poland) is perhaps one of the most exciting early-career artists working today. In 2020 he was listed as one of the most in-demand artists on Artsy, alongside Andy Warhol, Yayoi Kusama, and Jean-Michel Basquiat.

His work focuses on the seemingly ambiguous moments of silence that often come into existence in the presence of the other (and occasionally even with oneself). The presence of these pauses feed the paintings with a sense of uncertainty and anticipation. Moritz uses colour, morphs space, and distorts the emotionally-packed human figures in order to show a clash of their inner and outer life.

He is an artist we have presented in 5 shows since we launched in 2018, and this is his first ever UK solo show. In 2019 we hosted a two person show with Igor Moritz and Kevin Perkins entitled A Long Way From Home, for which he created multiple canvases and works on paper. His large canvas Keeping Time was one of the first to sell in our show Antisocial Isolation at the Saatchi Gallery in London in 2020-21.

His signature technique of conte-on-paper drawings is something that has captivated us at Delphian ever since we came across them, and so when the opportunity to host Igor’s debut UK solo show arose we knew we wanted works on paper. Whilst his oil on canvas works are more theatrical, the works on paper are more spontaneous, voyeuristic, and subtle. The introspective beauty present in these everyday scenes is one of calm quietude, as even when amongst others each subject in these works looks lost to themselves they remain present in their environment.

This particular body of work is his strongest yet, and the way he renders the subjects (often intimate friends of his, as well as himself) in a distorted yet beautiful way calls to mind artists such as Egon Schiele and Henri Matisse. The intimacy with which he depicts these subjects is one that is not afraid of distortion to create (or capture) emotion. In a similar vein to Francis Bacon Moritz captures the rawness of the interaction first, often not compromising this vision even if this renders the subject distorted and unrecognisable to all but Igor himself. His diaristic method of working presents the viewer with a snapshot into the artist’s life, giving us a deeper understanding not only of the work and its inspirations, but also of the artist.

Enquire about artworks
See all exhibitions