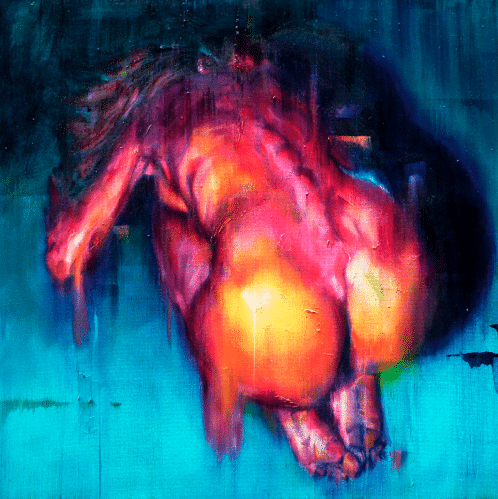 Figures are poised in almost cinematic realities, instigating a sense of familiarity, yet these worlds are disrupted with sharp glitches and gestural sweeps of colour; a disrupted reality which isn’t quite as familiar as it first seemed. Motion swirls around the carefully constructed figures as they move through the canvas, expressed through the artists loose, confident and textural application of the medium and liberal use of vibrant colours which surrounds and interacts with them.

‘Fractured Integrity’ explores an emotive narrative, told through the female form with a series of frozen moments exploring the psychological darkness which accompanies our human need to connect; insecurity, power, isolation and vulnerability. Identity is subverted by the concealment or obscuring of the face, drawing our focus directly to the body. The gaze of the voyeur, however, is irrelevant. These characters recoil and turn away from our stares, an ambivalent nonchalance to our presence is created. Though beautiful and elegant, they make no attempt to seduce us with their naked forms. As we move past the beauty of colour, we are left with subtle suggestions of darkness, pain and anxiety, moments which create for the viewer a context to reflect on their own unique experiences.

Why did it take you so long to do a solo show?

I always knew that I wanted to produce a show that was more then a series of portraits. When I first started out I was painting figures. But after a couple of years I fell into this loop of constantly painting portraits. So I waited till something pulled me out of that. And then it hit me, nothing was gonna pull me out of that but myself. Like I was waiting for some devine intervention. But really I just needed to pull myself away from it, and start producing the work I really wanted to. That took time, and it took even more time to be really happy with what I was producing when I went in this new direction.

Why did you decide that you needed this new direction?

I was tired of the box I had been put in by the galleries and the audience. “Oh you’re a portrait painter, we want the portraits” and I’m thinking, I’m a painter, full stop, not a ‘portrait’ painter. I wanted to remind myself I was capable of paintings more then a portrait. I wasn’t happy about the box I had fallen into and wanted to break free. Time has also helped with that. As it’s been a while now, people do seem to have forgotten about the portraits, or certainly aren’t so expectant that everything they see of me would be a portrait. Which is nice and refreshing.

Do all of the works feel like they are a part of one series for you, or is each work an autonomous piece?

It was important for me that this felt like a body of work when viewed together. There is a narrative to it all. It tells a story in a sequence. Which is explained to some degree in the zine I’ve made for the show. But at the same time I was very much aware that I wanted each painting to also stand up on there own individually. I really didn’t want the viewer to feel like they were looking at the same painting over and over again but maybe the colours had changed slightly.

In terms of the narrative, did you decide what this was going to be beforehand and then create works to illustrate it, or did the narrative develop from the paintings in retrospect?

At the start I was just painting. I took time to just paint anything but portraits. When in that zone, I think what happens is, what’s on your mind ends up coming through. How conscious you are of that at first I’m not sure. You step back from the painting look at it and think, wow ok where did that come from, and then days or even weeks later you realise that small thought at the back of your head really influenced the way you put paint down on the canvas that day. After a while of just painting it then naturally became apparent what was most important to me to communicate with this body of work. From there it became a conscious effort I’d say, so almost half way through. But lots of paintings were done at the beginning, communicating various things, paintings that will never be seen, that have now been painted over. 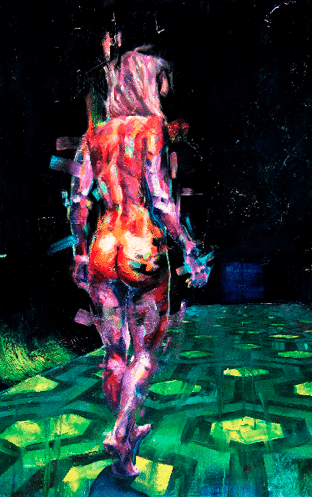 Beyond The Shadow Of Doubt – Oil on Canvas

Where did the title Fractured Integrity come from, and what connection does it have to the paintings?

The title relates to the fact that u own your integrity. That’s yours and yours only, no one can take it from u. You’ll always have it. But people can question it, sometimes rightfully so, sometimes not, it’s just the other persons insecurities been forced upon you. Sometimes you will do things that are questionable, which can put your integrity under scrutiny. Other times it will be at its best. We are humans, our integrity will be up and down over our life time. Causing our emotions to be the same, which is what the paintings communicate. Emotions stirred due to your own actions and others. The fractured part is a reference to that fact that it can never be solidly good at all times, but up and down.

So how does the title inform the works themselves, and does this body of work feel complete and finished with the show, or will it continue?

The paintings represent different emotions, feelings we’ve all felt, moments we have all lived. The women’s face is hidden or partly covered, because it’s not about them in particular, but the feeling the painting evokes. Hopefully they start a dialogue with the audience about those feelings and emotions. In turn causing the audience to talk about those situations they have been through.

At this point the body of work feels complete for me. The paintings in my own head took a narrative arch. The story was told. I now look forward to the next story. In my head there is always a story to communicate with the art. A movie told in a number of stills as it were. 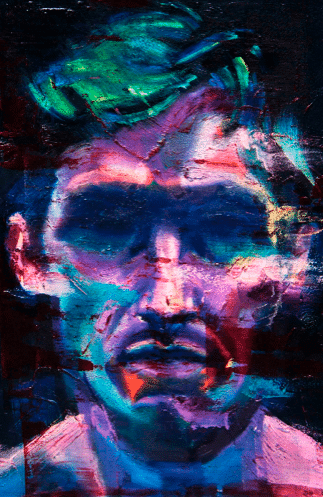 Travel As A Source Of Inspiration – The Jaunt