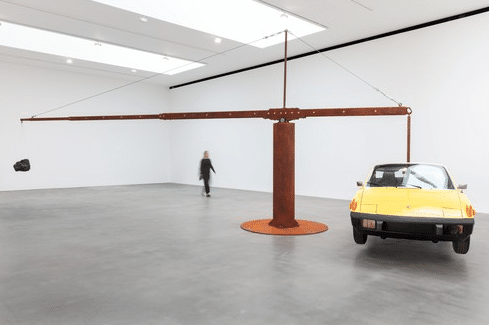 In their latest show, Gagosian gallery is isolating two works from Chris Burden’s retrospective at New Museum in New York in 2013, and presenting them together in their Brittania Street gallery. Entitled Measured, the show speaks of symmetry, bringing together two works that exist via the equality of weight between two opposing objects. In Porsche With Meteorite, a genuine nickel-iron meteorite counterbalances a restored Porsche 914.

This work is one which suggests immense, and yet dormant, power. The power of the sports-car is curtailed and it is left sitting idly, as if weightless, whilst the meteorite sits cold upon the opposing end of the fulcrums arm. These two objects have had past lives that were incredibly high-octane, for Burden’s restoration of a vintage car rather than the selection of a showroom floor model is not merely serendipitous. These objects have been imbued with an immense power, which through his transfiguration, have become impotent in their stillness. They seem to have lost their virility, and sit immobile, suspended in time.

The meteorite is only twenty percent of the weight of the car, and for this reason the beam that supports both is much longer on the meteorites end. It is a purpose-built structure that towers overhead, telescopic – although the lack of registration-marks on the uniform oxidisation suggests that this functionality is only for show; it has potential, but this potential will never be actualised. The vehicles have been painstakingly restored to their former perfection, whilst the oxidised steel components, display an artificial history that in the vehicles js genuine, but obscured.

The viewer is at once struck with the delicacy of the work, and yet feels insecure in the potential for danger. In many ways both works in Measuredare redolent of his 1996 work The Flying Steamroller, in which a twelve-tonne steamroller is attached to a pivoted arm, counterbalanced on the opposite side. In the middle of the arm, there is a rotating fulcrum that allows the steamroller to lift off the ground and float in the air once it has reached a high enough velocity for the counterweight to elevate it. In this work the potential for unmitigated disaster is very real, and it is impossible to not be struck by the delicacy with which this immensely dangerous event is taking place. The steamroller glides serenely through the air like a bird. 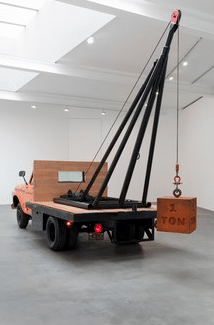 The other work in the show, One-Ton Crane Truck is a refurbished Ford truck counterbalanced with a purpose-built single tonne cube, which contrasts with and exemplifies the exotic nature of the meteorite. In this work, the vehicle is a rudimentary machine used for laborious work, which is diametrically opposed to the extravagent sports-car in the other room. This juxtaposition of the functional and familiar robustness of the crane truck and cube, with the exoticsports car and meteorite, seems to highlight the intrinsic qualities of each by playing them off against one another. The sports car appears all the more luxurious and fast, whilst the truck speaks of rigidity and strength. This piece is slightly less successful than its counterpart however, and as was suggested to me by a friend, a bit ‘cartoony’. The one-tonne weight is a rather arbritrary measurement, as the trucks front wheels are planted firmly on the ground. Were they to be lifted ever-so-slightly off the floor, the work would have been immeasurably powerful, but alas, that is not the case. Having the counterweight a purpose-built cube, as opposed to a magical, extra-terrestrial chunk of metal, diminishes this work somewhat. It does however, suggest that this work means something different to its opposite, in that here the work suggests industry and industrialization, grounded in the real, laborious world. The other has a magical, almost fairytale quality, and is suggestive of some kind of freedom (or its lack thereof). It is not that either work critiques or diminishes the other, rather that they both speak of similar ideas, in opposing ways.

Burden’s early work was chaotic and reckless, but never haphazard. There was a raw energy and freedom to his performance works that now, because of his untimely death, will never be seen again. This show has a somber quietness to it, that when viewed after the artist’s premature death, screams of lost potential. The cars potential as a conduit to immense power and freedom is left suspended, and isolated from the very ground that gives it its meaning. In this however, it is imbued it with a newer, more abstract power. The meteorite appears as if lassoed out of the sky, hung upon a metal gallows and displayed in all its impotence, energy lost irretrievably.

In Burden’s earlier work, he put himself at great physical danger and exposed himself to actual bodily harm for his works.Towards the end of his career, he made works that placed the viewer in arenas of potential danger, with The Big Wheel and Steamroller, where there always seemed that chaos was ready to break free. In these works presented in Measured, the chaos and energy that could ensue has long passed, and now lays dormant within these objects, perfectly suspended to reflect that an equilibrium has been reached between chaos and calm. The gallery has a stillness that heightens the balance of the two works, both individually with the literal balance between objects, but also the way in which both works discourse with each other.

As Mark Rothko once said, “complete equilibrium is death”, and within these works, it is the perfect symmetry of both that each nullifies the power of its opposite. All ordered systems strive towards chaos, and these equal and opposing forces arrest this eagerness for disorder, creating a stunted equilibrium redolent of serenity. It is a stale serenity however, as each work calls to mind a lost potential, which when read in the post-Burden landscape, echoes of loss.

For more by Benjamin:

For more details about the show: