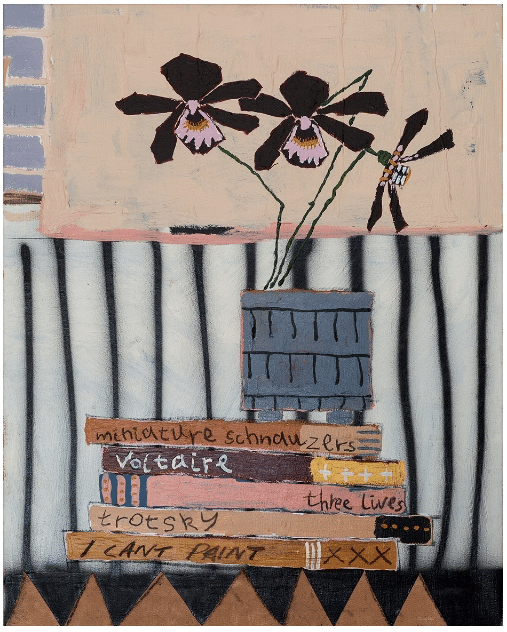 Art Aesthetics magazine have recently reviewed our solo show with Australian painter Jordy Kerwick. Read what they had to say below…

Kerwick’s still lifes are the perfect foil to the quixotic ideals of the artist. He only started painting in 2015, but has risen in truly meteoric fashion having already exhibited as far and wide as New York and San Francisco in the United States, and Paris, Cologne and Hamburg in Europe despite working from Melbourne, Australia. We finally caught up with Kerwick’s first solo UK show, Diary of an Introvert, in South London. I was accompanied, charitably, by Aistè, who generously made time for me having just released a new single, ‘My Only Friend’.

Our destination was Delphian Gallery: the itinerant art space founded by Nick Thompson and Benjamin Murphy. Their brisk existence requires that one show’s success entails the next show’s very premises. (They needn’t worry, Kerwick has done exceptionally well with only a couple of paintings remaining for sale.) So we went to Delphian Gallery’s temporary venue at the AMP Gallery’s space in uber-cool Peckham. 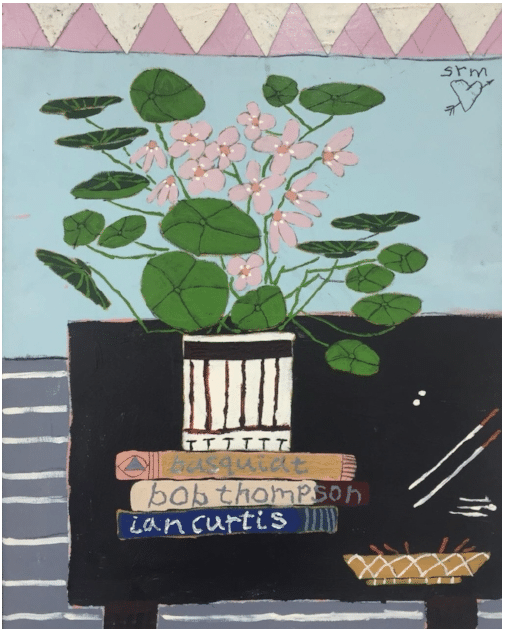 Kerwick’s paintings seem to prevaricate on the ‘artist’ as a figment of our imaginations. (They’re usually stereotyped as philosophy-thinking, chain-smoking, wine-drinking, beret-wearing Frenchies—according to my school’s careers advisor at least.) Of course, they’re not. You’ll struggle to find persons more professional and committed than artists, but bad reputations die hard. Kerwick isn’t scared of utilising these tropes, but makes for some fine self-exposition amid his own painterly equivocation. For by engaging in these tropes, the artist reflexively reveals himself.

Kerwick’s Diary of an Introvert encompasses some thirteen paintings of which twelve are still lifes. You espy geraniums and flytraps, which are usually set atop stacks of books bearing the names of other, bolder artists, thinkers, or musicians. Their spines carry Susan Sontag and Marcel Proust alongside Nick Cave and Patti Smith. (Unfortunately, these musicians aren’t quite to Aistè’s taste.) As for the artists, the works of James Ensor, Jean-Michel Basquiat and Bob Thompson are a world away from Kerwick. Ensor (1860-1949) was a forerunner of Expressionism. His Tribulations of St Anthony (1887) is wildly colourful and surreal for an artist working in the 19th Century. The Fauves (a.k.a., the Wild Beasts) followed on from the Expressionists. They also influenced Bob Thompson’s vivid, but starkly flat compositions. It’s strange, then, to find these artists’ names scrawled against the dull-pastels and ochres of Kerwick, who, when interviewed by Maria Stoljar, blandly said, ‘I really like the muted earthy tones.’ But then quietly proposed that this is ‘probably not a good thing.’ Aistè thinks the same: ‘I just want more colours.’

So other than the plants and the books, what else? You sometimes look at white spots on the canvas and what appear to be unfinished cigarettes; ‘pills and cocaine,’ suggests Aistè, though she’s not really sure if Kerwick is really that kind of guy. You can see what we’re referring to in Diary of an Introvert 7 (2018). You’ve got cigarettes sitting beside the ambiguous white spots and lines on the table. Ian Curtis supports Bob Thompson who supports Basquiat upon whom rests some pink germaniums. We’ve no difficulty imagining Curtis, Thompson and Basquiat taking full advantage of the table’s wares, but not Kerwick. For they’re proper ‘tortured artists’ whose creativity was breath-taking, but quickly burnt out. You sense that Kerwick is ‘looking in’ on these artists, but too self-consciously aware that he’s not them. ‘I don’t smoke,’ he told Stoljar, ‘but you don’t want something to be too pretty and cigarettes aren’t pretty. I still look at people smoking and think it’s cool. I’m not endorsing it for one second.’

We’re accustomed to thinking of painters as cool: rebellious, penniless, alcoholic, perhaps sensitive, but always creative. It’s supposed to come at some cost: they die too soon, are melancholic if not downright mad. (Of course, the truth is rather more boring. But we’re dealing with the popular ‘image’ of the artist.)  Kerwick plays up to this by daubing ‘la paix et la tranquillité et le pressentiment’ on the side of Diary of an Introvert 4 (2018).

Kerwick’s interview with Stoljar is enlightening. He puts much of his work down to the fear of growing old: ‘not that I was ever cool, but I just feel less cool that I was before.’ We want out artists to be misunderstood and ahead of their time like Ensor; or, tragically cut short like Basquiat; or as expressive and bold as Thompson. Yet Kerwick is none of these things. (He’s happily married with children in Melbourne, Australia.) He’s previously said that ‘home doesn’t possess wonderment for me, not like LA or Paris.’

Nowhere is Kerwick’s self-deprecating character more visibly at work than in Diary of an Introvert 2 (2018) where the works of Voltaire and Trotsky and Gertrude Stein are crowned by ‘Miniature Schnauzers’ (very cool) and supported by the simple admission, ‘I can’t paint’. Aistè reckons he means, ‘I can’t paint…like Basquiat, like Thompson, or like Ensor.’ And yet, sometimes he does. You’ll often come across a Basquiat-like mark, cypher or glyph.

I finally think I’ve got an analogy for Kerwick: He’s more Sancho Panza than Don Quixote. In Miguel de Cervantes’ masterpiece (1605 & 1615) the eponymous character simply reads too many books about chivalrous heroes. So many, in fact, that he loses his mind. He takes these stories so literally that he endeavours to become a grand knight-errant in search of adventure. He’s followed by his ‘squire’ Sancho Panza who serves as the level-headed foil to the wild idealism of Don Quixote.

Kerwick’s paintings proffer Ensor, Thompson and Basquiat as so many Don Quixotes. (How many artists aspire to Basquiat?) But for Kerwick, as for Sancho, these are fictions, so many books, upon which he places his flowers and, with a forthright naïvety, simply paints. ‘It’s kind of sad,’ says Aistè. ‘I think he’d like to be just like those Expressionists and Fauves.’ I disagree, there is such derring-do in these paintings, just obliquely, perfectly referenced. For that, it’s 4/5 stars from me and 3/5 from Aistè (although she admits that maybe that’s just because she doesn’t like Nick Cave and Patti Smith).

And learn more about Jordy HERE, and buy his prints HERE