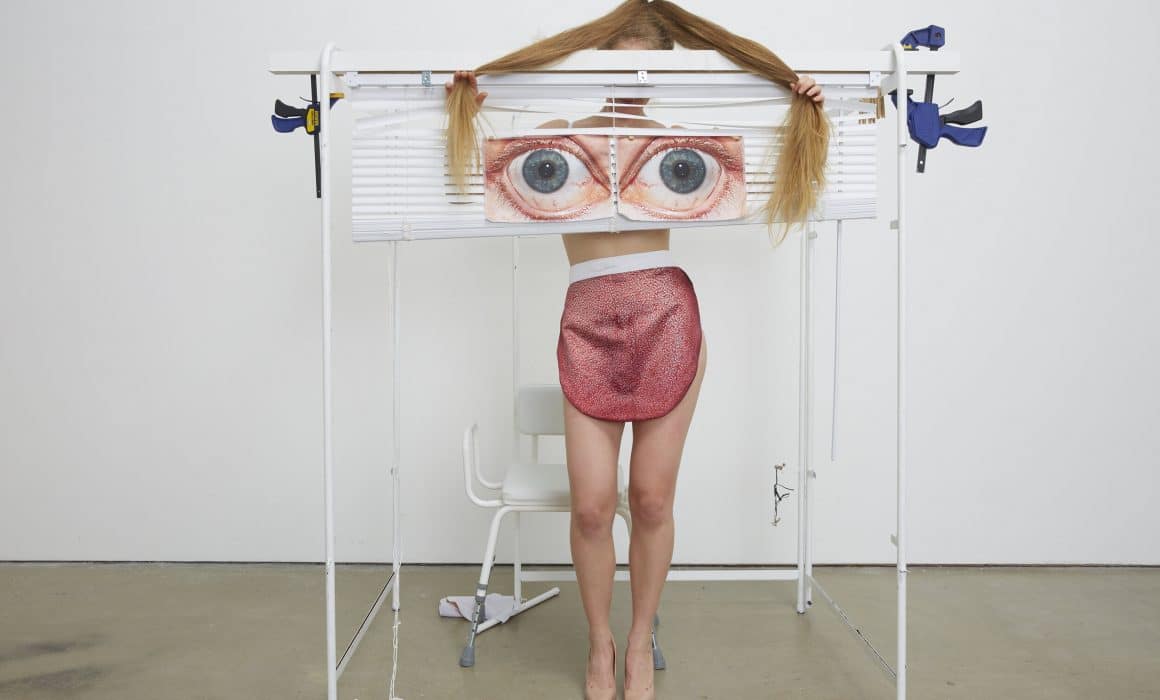 Performance artist Rosie Gibbens joins us for this episode of the Delphian Podcast. Her intense, often very personal performances raise questions of gender, sexuality and domesticity. We talk to her about tropes of performance art, how crowd reaction and participation affects her work as well as the importance of accepting criticism. 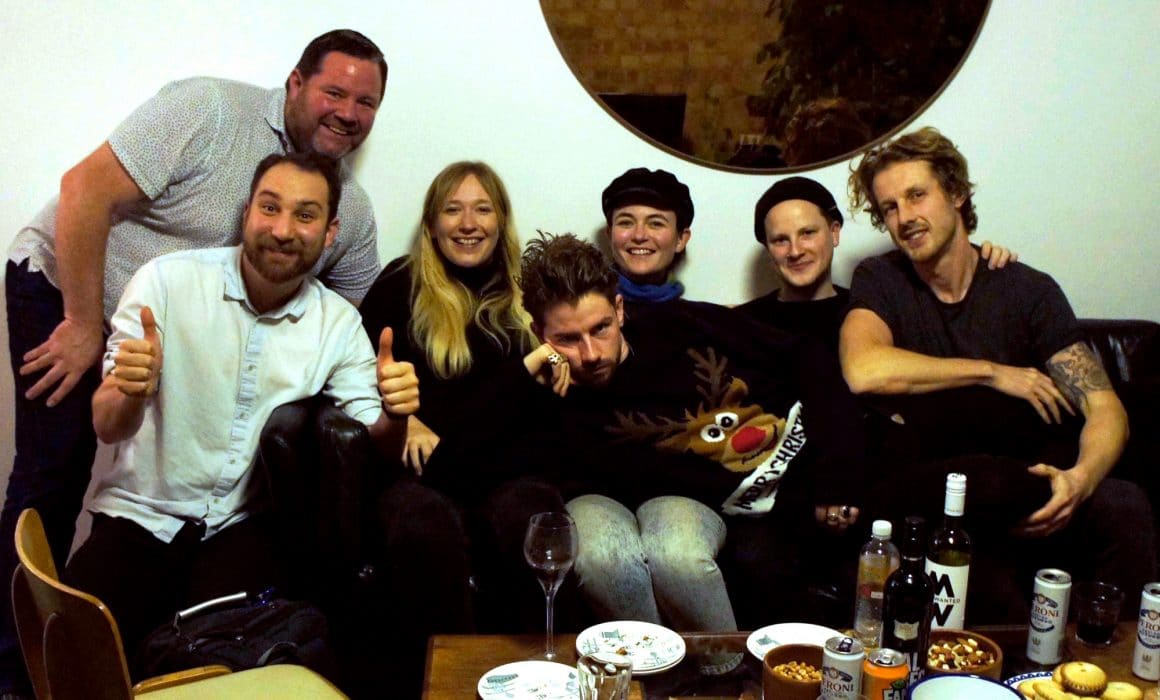 For this special edition of the Delphian Podcast we met up with some of our friends who who also have their own art based podcasts. We had a chat with them over a glass of wine and a mince pie about art, podcasting, and why they got into the business, and each podcast will be releasing this episode on their own channels. Make sure you check out their podcasts as they are all great! They are the Artfully Podcast, Art Proof Podcast, and the Mizog Art Podcast. 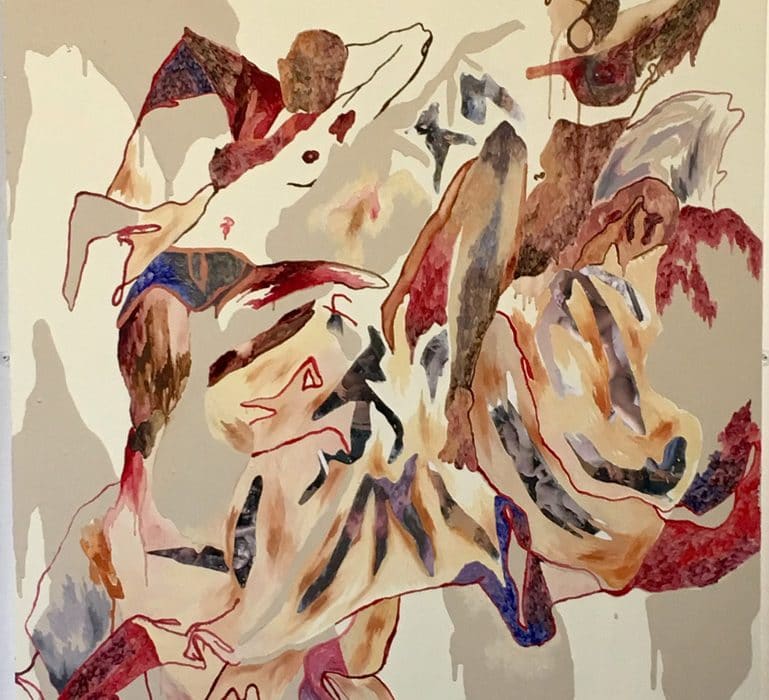 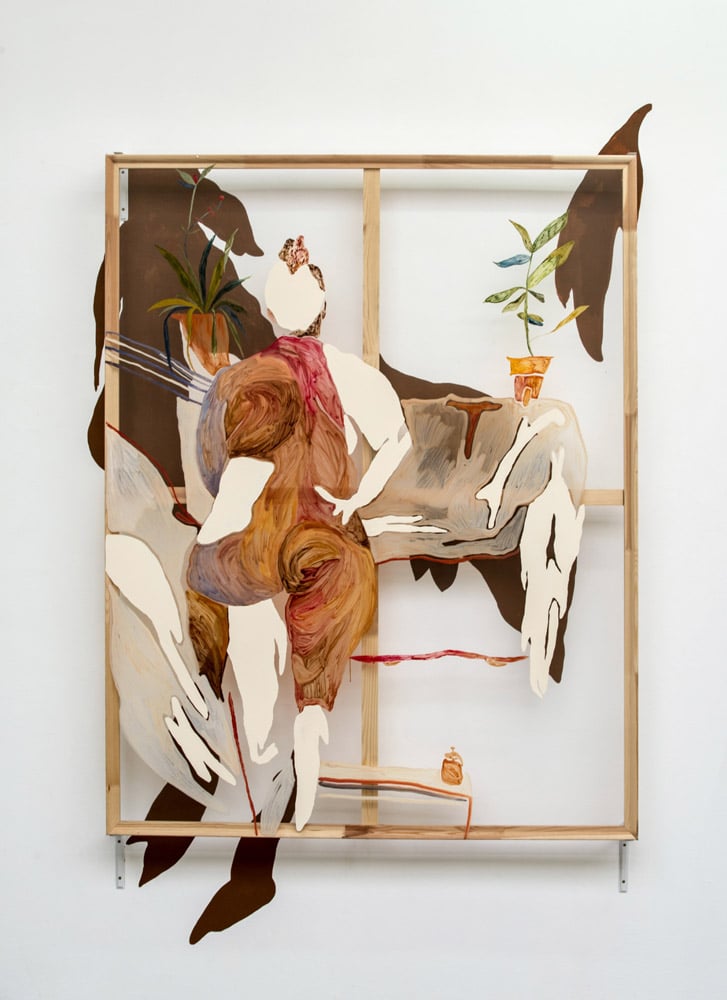 In episode 15 of the Delphian Podcast we speak to the extremely exciting artist Miranda Forrester who has just completed the Plop Residency and was involved with the BBZ Alternative Graduate Show at Copeland Gallery. We talk about her work, the lack of diversity in art education teaching, and learning to say no to to opportunities that aren’t right for you. 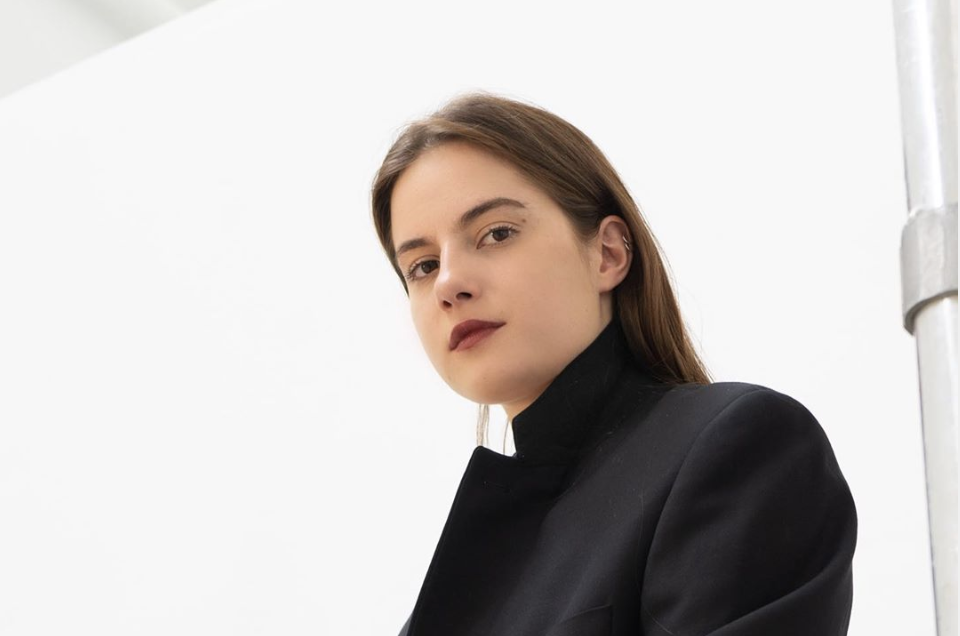 Ellie Pennick – Episode 13 of the Delphian Podcast is now live!

Ellie Pennick is the founder of Guts Gallery, who aim to provide financial support and exhibition opportunities for artists less platformed within today’s contemporary art scene. Their desire is to facilitate space and exposure for BAME artists, female artists, working-class artists, queer artists, and artists outside of London (bridging the North/South divide). She joins us for this episode of the Delphian Podcast as we talk about the varying landscape of curation and artist opportunities as well as our collaborative exhibition ‘Delphian x Guts’. 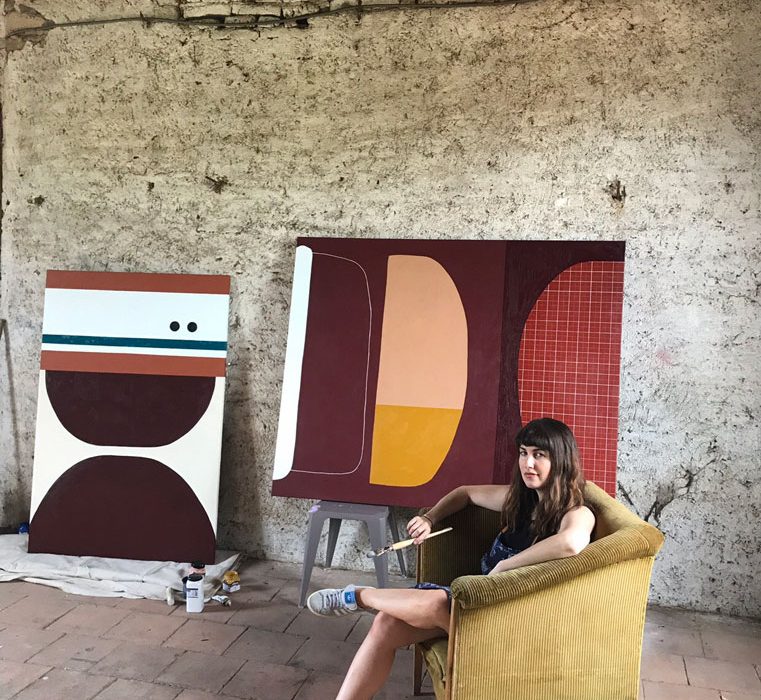 Rachel Mccully – Episode 12 of the Delphian Podcast is now live! 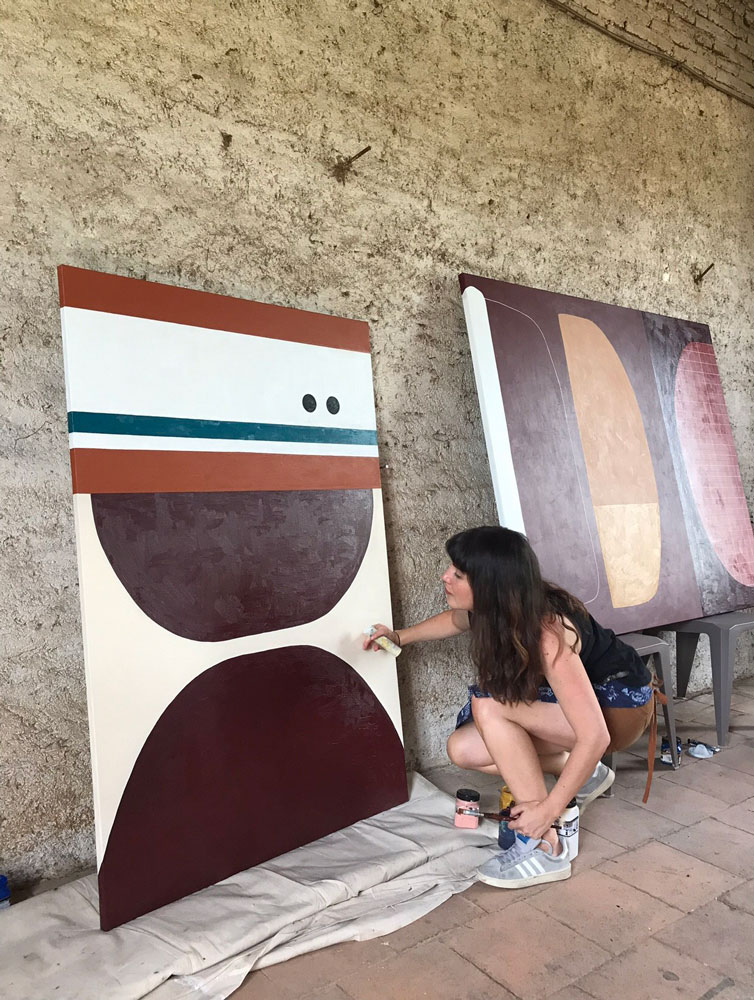 Whilst Australian artist Rachael McCully was in London she joined us on the Delphian Podcast to talk about her process, taking inspiration from everyday objects, and juggling a home life with producing work. We also talk about the subject of using art as a form of therapy and her experiences with this. Rachael’s abstract works combine bold and muted colours to create perfectly balanced, harmonious compositions which are calm and serene – an antidote to our often hectic lives. 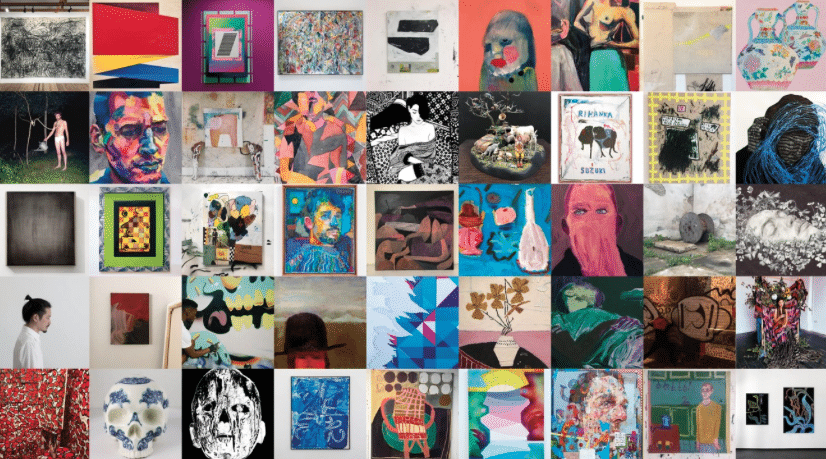 Paul Weiner (@POWeiner) – The book that I’m writing and releasing in about twenty years. Keep your eyes peeled, friends.

Charley Peters (@CharleyPeters) – ‘A Room of One’s Own’ by Virginia Woolf. It shows really well how artists need space and time to be creative – because only once we have that we can discover the truths in ourselves and what that means for our work.

Jonny Green (@JonnyGreenArt) – The Mass Psychology of Fascism by Wilhem Reich. Written in 1933. Happening in a country near you right now. The politics of the sexually repressed.

Richard Stone (@Artist_Stone) – The Last Wave by Gillian Best, its a great book, a love story to the sea and ahem, it was inspired by a painting of mine of the same name.

Klone Yourself (@KloneYourself) – 100 years of solitude.

Andrew Salgado (@Andrew.Salgado.Art) – Susan Orlean’s ‘The Orchid Thief’ is about obsession, and its non-fiction, and its brilliant. thats my first pick. a much more obvious choice for artists would be Art/work by Heather Bhandari as its like, ‘everything you need to know yesterday about an art career’.

Benjamin Murphy (@BenjaminMurphy_) – In Search Of Lost Time by Marcel Proust. He understood the human condition better than anyone else, and most of what you could ever want to learn about life is contained within ISOLT.

Soumya Netrabile (@Netrabile) – I think Interviews with Francis Bacon by David Sylvester is essential for every artist. Bacon deftly elucidates some of the important nuances of the art making process in response to Sylvester’s brilliant questions.

Hedley Roberts (@HedleyRoberts) – One book? Phew. That’s tough. Either Brave New World by Huxley, or Narcissus and Goldmund by Hesse.

Matthew Allen (@Matthew__Allen) – I would recomend everyone to read the poetics of space, by Gaston Bachelard. Its a beautiful read and lead me to a deeper appreciation for the everyday spaces that I move through and dwell in.

Neva Hosking (@NevaHosking) – I reckon To kill a Mockingbird is always required reading.

Justin Lee Williams (@ArtJLW) – To many to mention, but I would start with all the major religious books, I’m not religious but it does give a understanding to why humanity is so fantastic and fucked at the same time

Fiona Grady (@Fiona_Grady) – “We Should All Be Feminists” by Chimamanda Ngozi Adichie – I think the title is pretty self explanatory. The aim of the essay is to remove the negative associations of the word feminism and embrace the idea of believing in equal rights.

Obit (@LazyObit) – Mr Bump by Roger Hargreaves. No matter how many knocks you take and how shit you are at life in general you’ll eventually find something that is perfect for you if you stay positive.

Johnny Thornton (@_JohnnyThornton) – Simulacra and Simulation by Jean Baudrillard. It really opened me up to a lot of interesting ideas when I was a bit younger and some of those ideas still resonate with me today

Jesse Draxler (@JesseDraxler) – Freedom From Anger – a book I lend ppl, who then want to keep it. I’m on my sixth copy.

Mevlana Lipp (@Mevlana_Lipp) – “The color of magic“ by Terry Pratchett. 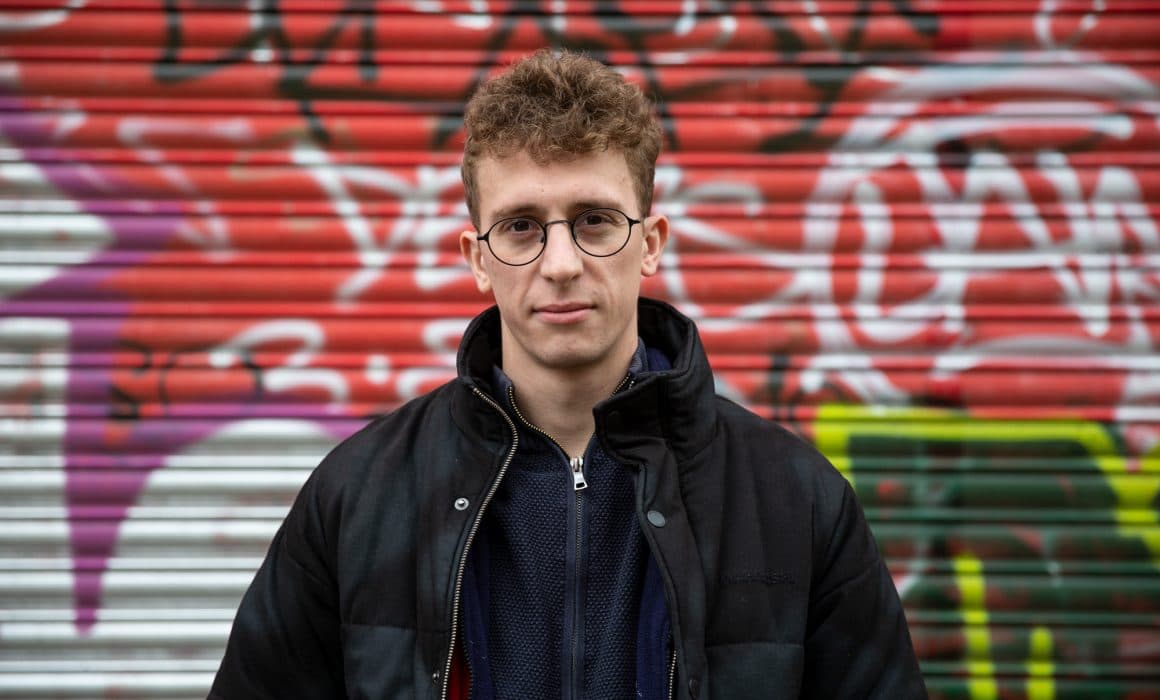 Charlie Mills – Episode 12 of the Delphian Podcast is now live! 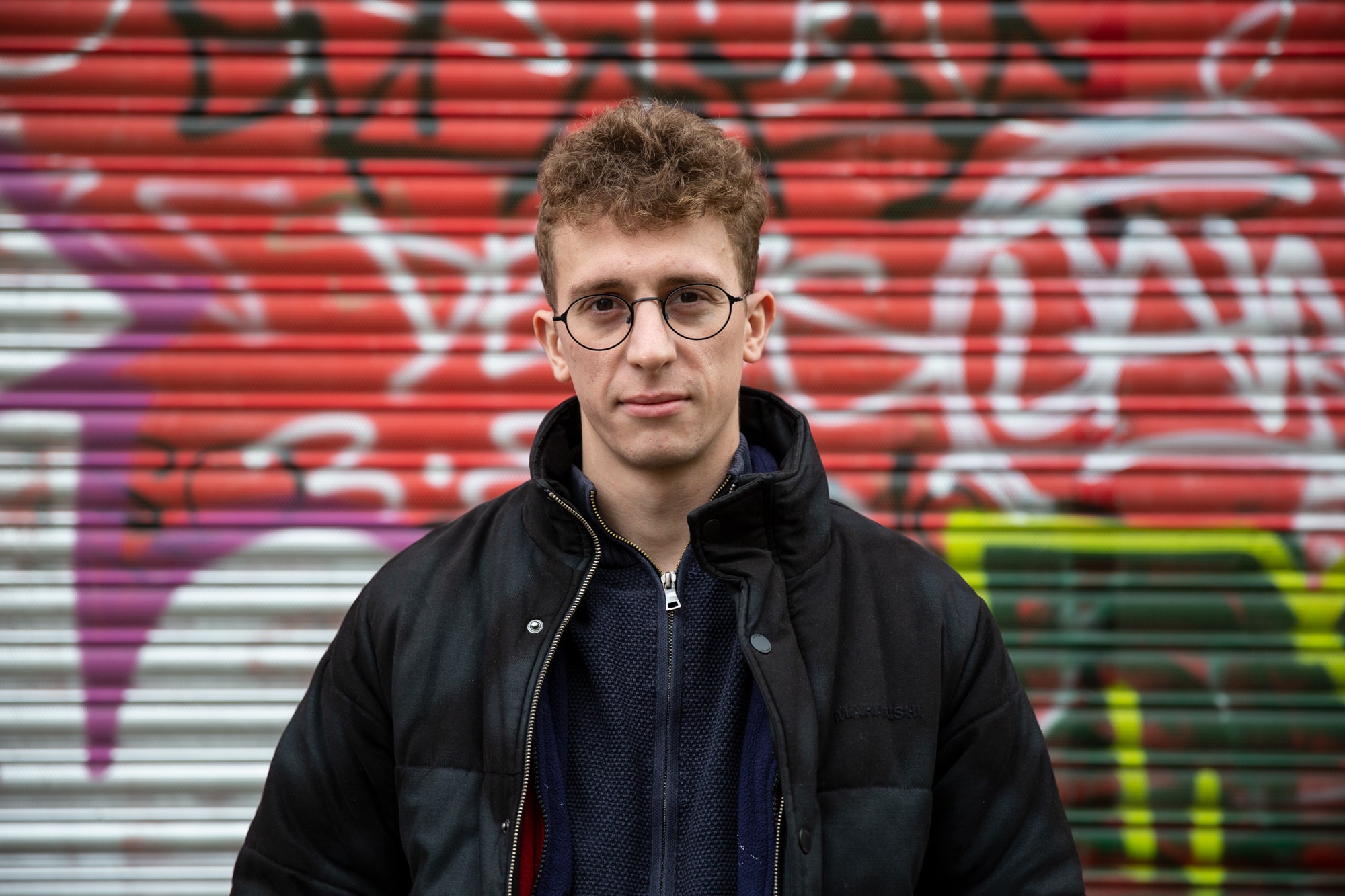 Charlie Mills is this episode’s guest for the Delphian Podcast. He is one third of the curatorial group Collective Ending as well as working for Bold Tendencies and Hannah Barry Gallery in South East London. In this episode we talk about Charlie’s numerous projects, past and future, as well as the changing role of the gallery in the current digital era and the difficulties and challenges of site specific works. 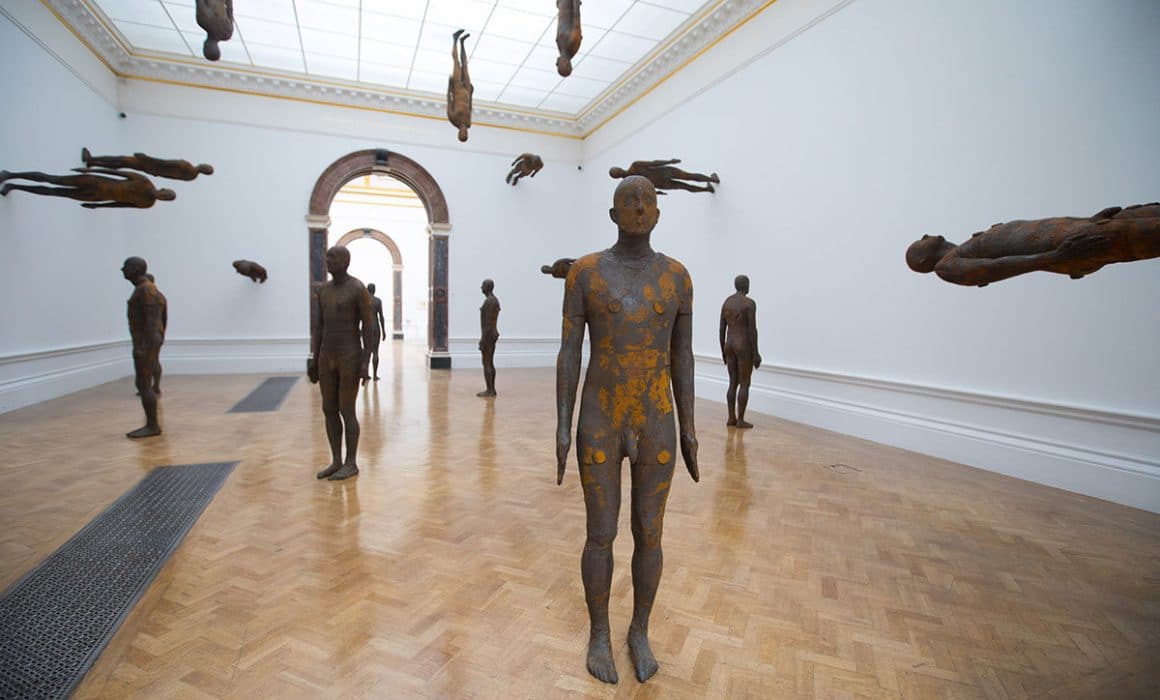 From the British coastline to the rooftops of Manhattan, Antony Gormley’s sculptures are recognised across the world. With work from his 45-year career alongside major new installations created for their galleries, The RA present his most ambitious exhibition in more than ten years. 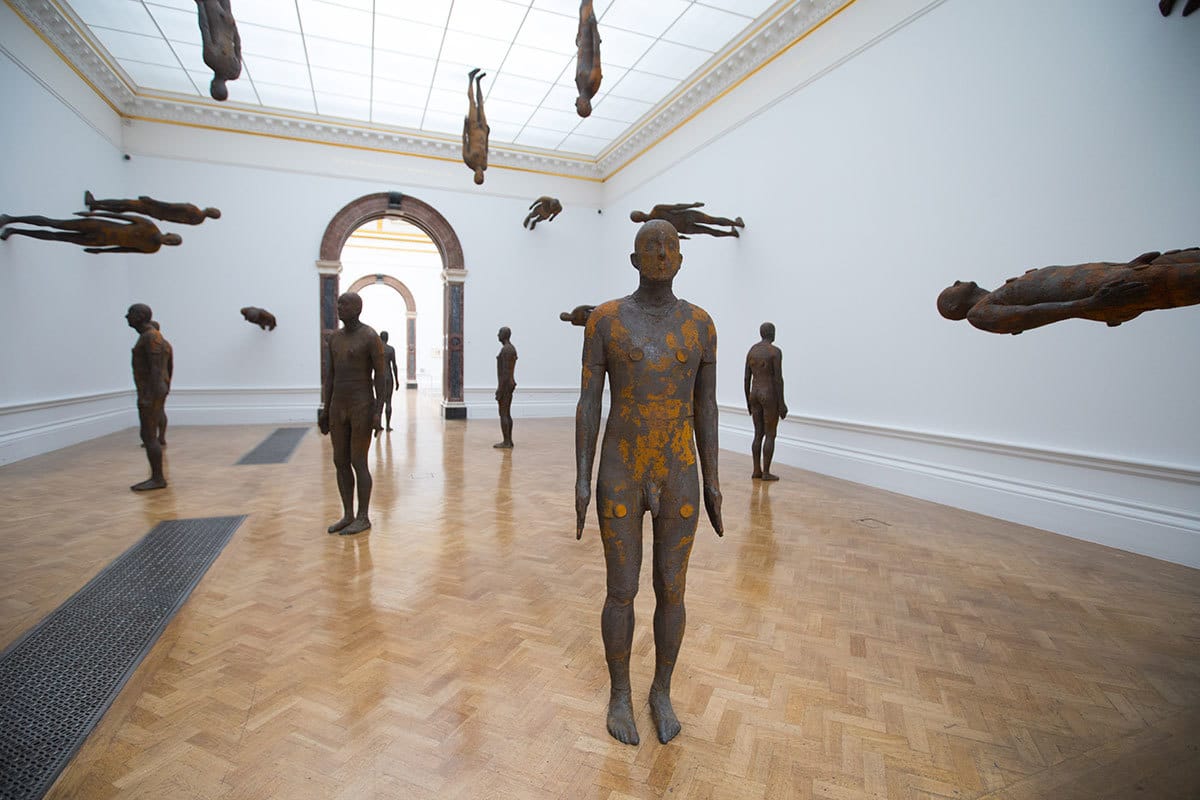 Following in the footsteps of Ai Weiwei and Anselm Kiefer, Antony Gormley will be the next artist to take over the Main Galleries with a series of works that test the scale and light of the RA’s architecture.

The exhibition will explore Gormley’s wide-ranging use of organic, industrial and elemental materials over the years, including iron, steel, hand-beaten lead, seawater and clay. They will also bring to light rarely-seen early works from the 1970s and 1980s, some of which led to Gormley using his own body as a tool to create work, as well as a selection of his pocket sketchbooks and drawings.

Throughout a series of experiential installations, some brand-new, some remade for the RA’s galleries, they will invite visitors to slow down and become aware of their own bodies. Highlights include Clearing VII, an immersive ‘drawing in space’ made from kilometres of coiled, flexible metal which visitors find their own path through, and Lost Horizon I, 24 life-size cast iron figures set at different orientations on the walls, floor and ceiling – challenging our perception of which way is up.

Perhaps best-known for his 200-tonne Angel of the North installation near Gateshead, and his project involving 24,000 members of the public for Trafalgar Square’s the Fourth Plinth, Antony Gormley is one of the UK’s most celebrated sculptors.

The exhibition is curated by Martin Caiger-Smith, with Sarah Lea, Curator at the Royal Academy of Arts. 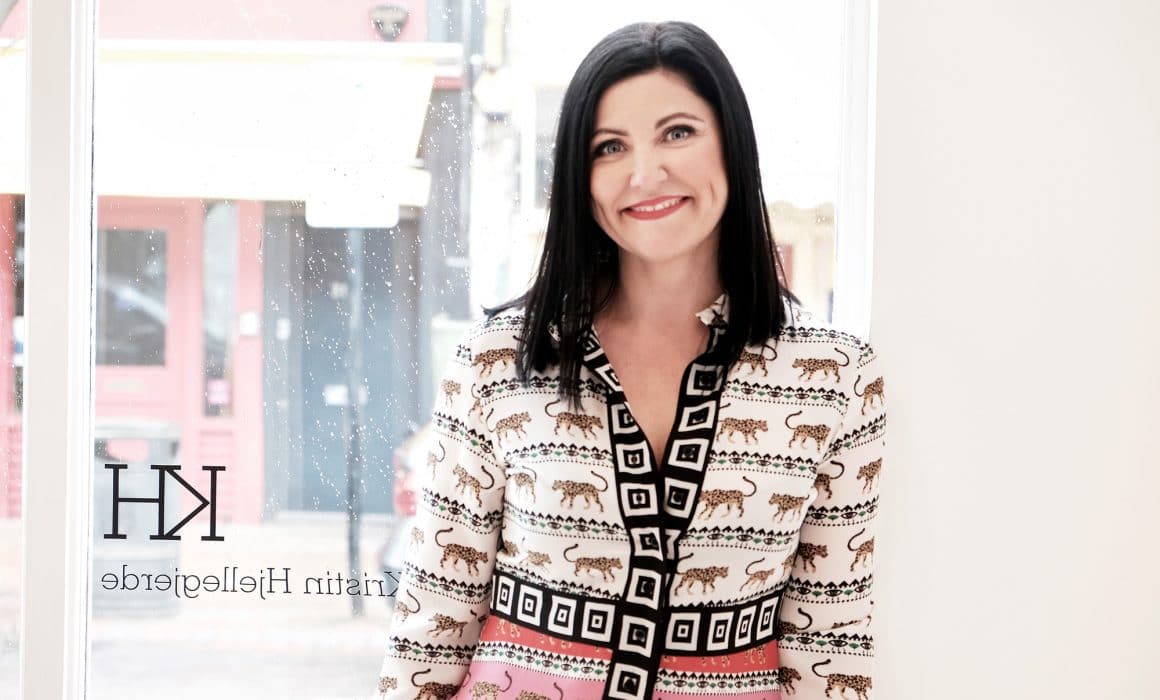 Kristin Hjellegjerde – Episode 11 of the Delphian Podcast is now live!

Gallerist and curator Kristin Hjellegjerde joins us for the Delphian Podcast this week. Known for its multicultural curatorial approach the gallery quickly gained recognition for exhibiting a roster of innovative, international artists since its inception in 2012. Kristin has galleries in both London and Berlin as well as a new London project space which will also be expanding in 2021.

We talk about the way in which she finds artists and how artists can make themselves more visible to galleries, the importance of networking, collaboration between galleries, and advice to young curators. We also touch upon the sometimes prohibitive cost of art fairs and how this affects a gallery’s decisions on their programming. 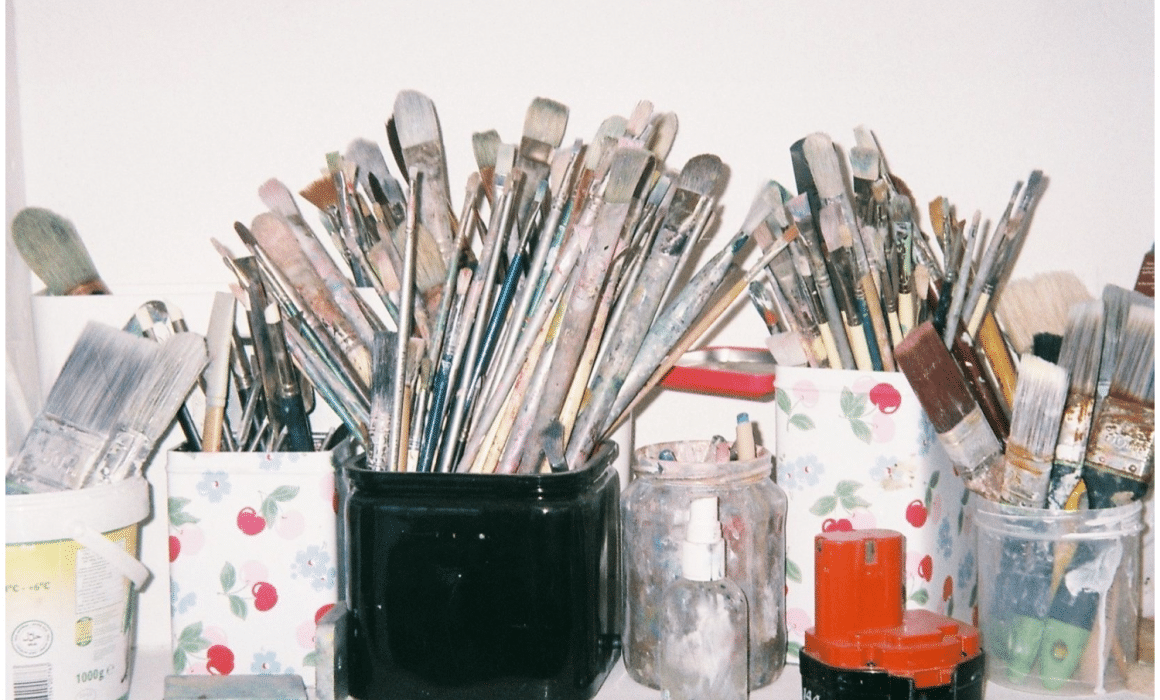 DATEAGLE ART is an independent London-based online platform, founded in 2017 by Vanessa Murrell and Martin Mayorga, that supports UK-based emerging artists in the form of interviews, studio visits, blog content and both online and offline exhibition curation. Their platform is about forging a community and this is why they personally visit every artist that they interview and feature. Their online content is equally gendered, ad-free, diverse in mediums and they don’t accept commission, as a means to keep their content as honest as they possibly can, through the lens of the artist. 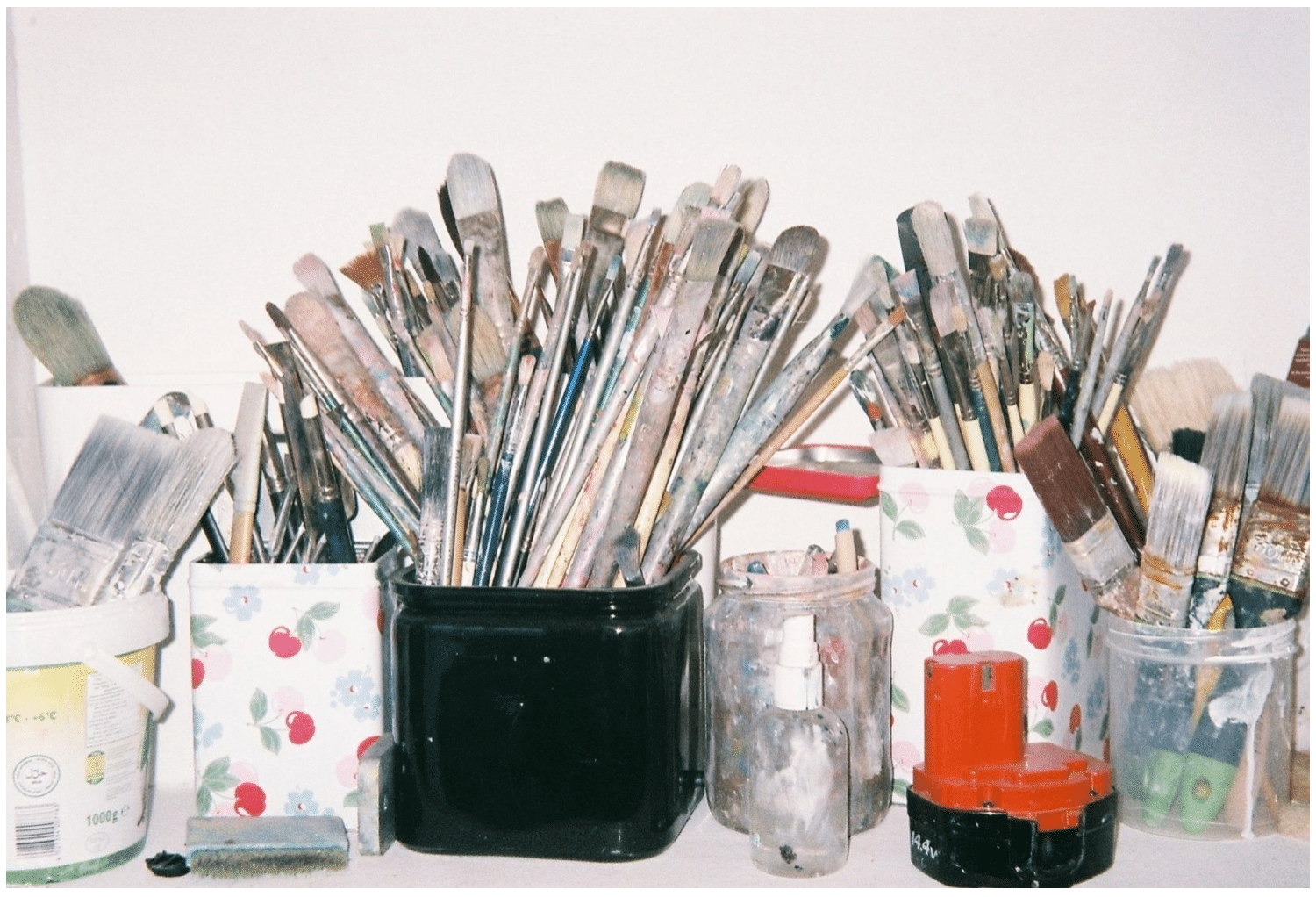 DATEAGLE STUDIO is the first creative art agency that offers both visual services and press and pr services within the contemporary art realm. Read more about their studio work here.

ONLINE, they operate as a journal in which they publish behind-the-scenes analogue photography of artist’s studios through their personal ‘Visits’, provide straightforward views from their contributor’s and guest artists in their ‘Journal’content, and allow in-depth discourse through their ‘Interviews’. They also undertake quick interviews through the ‘5×5’ series, in which they ask the same 5 questions to 5 artists in group shows as a means to giving an equal voice to a variety of artists, and through the ‘DM Interviews’ with international artists, revealing their first times. The website also hosts a series of music playlists from international artists, through the ‘Mix!’ section, allowing the audience to engage with emerging art through variety of forms. They are also involved in curating ‘Spread The Virus’, an on-going online exhibition evolving over 12 months which intends to chart the year through aesthetic as well as social and political lenses, co-organised with an invited guest curator.

OFFLINE, they curate temporary shows in non-exhibition spaces throughout London, along with hosting regular panel discussions and public events throughout the UK.