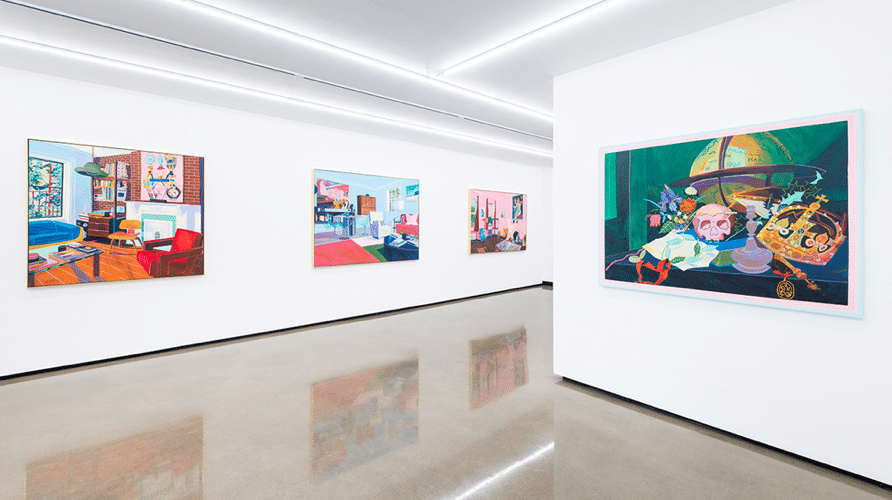 For his first solo exhibition at Beers London, Andy Dixon presents Alchemy, an exhibition that brings together a collection of artworks depicting paintings-of-paintings and patrons’ homes.

Art has long had a tumultuous relationship with the matter of its own value. Seemingly arbitrary elements can positively or adversely affect the price at which a painting will sell. Take colour, for instance – paintings prominently featuring the colour red, for example, sell for a higher price point, due to it being a lucky colour in the Asian market.

Dixon plays with this discussion and subverts it somewhat, asking the question: what is the value of a painting of a valuable object? By depicting his own paintings situated in the living spaces of his patrons, he is adding to a lineage of artist studio paintings, in which the artist would paint their immediate surroundings. In the case of Matisse’s Red Studio, for example, these would often include examples of unfinished artworks. In Dixon’s pieces, the artworks’ grandiose properties seem diminished – their vividness lost amongst the similarly brightly-hued surroundings. They become just another item of furniture. Whilst Dixon most often depicts objects of wealth as created by others in his work – Versace jackets, silk shirts, Jeff Koons tote bags – in this series, he points to his own paintings as the commodity. In doing so, he knowingly eschews the creative aspects of his paintings for the commercial ones. 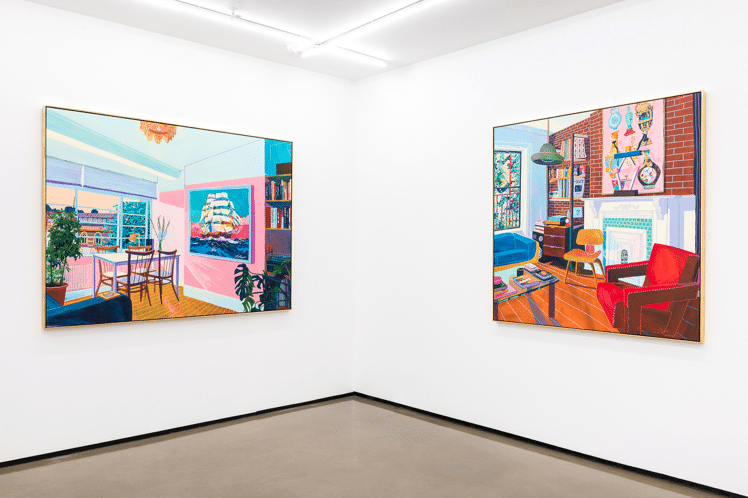 It seems that Dixon has become willingly complicit in ‘the game’ which he has thus far admired from a short distance – but this is clearly the natural progression for his work. Other pieces on exhibit are those that can be interpreted as paintings-of-paintings, where acid-tinged renditions of reclining Venusses, equestrian portraits and erotic renaissance pieces are bordered by candy-hued gilded frames rendered in paint. By focussing on the depiction of these artistic tropes with such a contemporary style and colour palette, Dixon forces us to view them in a new light – without the barriers of who painted the work, or when it was created, we are forced to look at what is depicted on a much more surface level, and consider the capitalistic implications.The title of the show, Alchemy, is a reference to the traditional pursuit of turning a base metal into gold. And this is what Dixon manages to do so masterfully; he takes images which are so ubiquitous in Western art and, through his own kind of magic, creates something wholly new and desirable out of them.

Andy Dixon is hyper-aware of art’s relationship with money. Signifiers of wealth abound in his large acrylic paintings, which take as their subjects stately lords, reclining nudes, ornate ballrooms, bathing beauties, and prominent paintings of the aforementioned motifs. Borrowing content from Renaissance art, Flemish still lifes, and Google Image searches of “most expensive vases”, his subject matter is selected on the basis of public expectation of what an expensive painting should look like. By sampling content verified as valuable by the market, Dixon positions his own work to ask, “What is the value of a painting of a valuable object?”

Our value of art is truly a phenomenon that operates on a set of rules distinct from the ones that govern the rest of our world. Paintings which feature the tropes Dixon samples from perhaps at one time had social or political agency but are now simply commodities assigned value by the highest bidder. Paintings of expensive things are themselves expensive things collected by the wealthy to promote the luxury lifestyle. However, Dixon isn’t out to mock the affluent. Rather, he is a complicit player in the game; his larger paintings of upper class social scenes tend to feature his own previous paintings hanging on the walls in the background. As Alex Quicho writes in Luxury Object, Luxury Subject, “His postmodern non-interest in either vilifying or reifying luxury cooly transmutes its weirdness.” A self-taught painter, he treats his high-brow content in a crude manner, matching a vivid pastel palette with rough line treatment. His practice has recently expanded to include 3D sculptures which mimic the figures in his paintings—absurdly disproportionate, yet still created with an eye toward beauty. In this way, Dixon’s own appreciation of his subject matter is evident; and while his work questions the subjective valuation of artwork, it also proves that it doesn’t necessarily detract from its beauty. 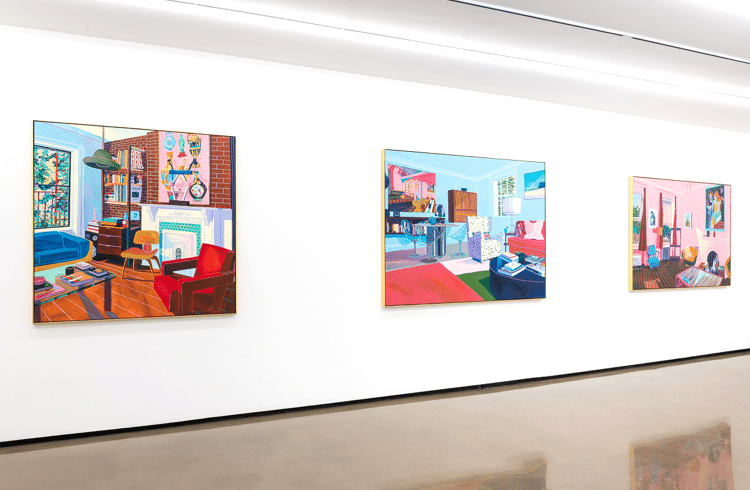 Before this, Beers hosted Kim Dorland’s great show, which can be read about HERE.