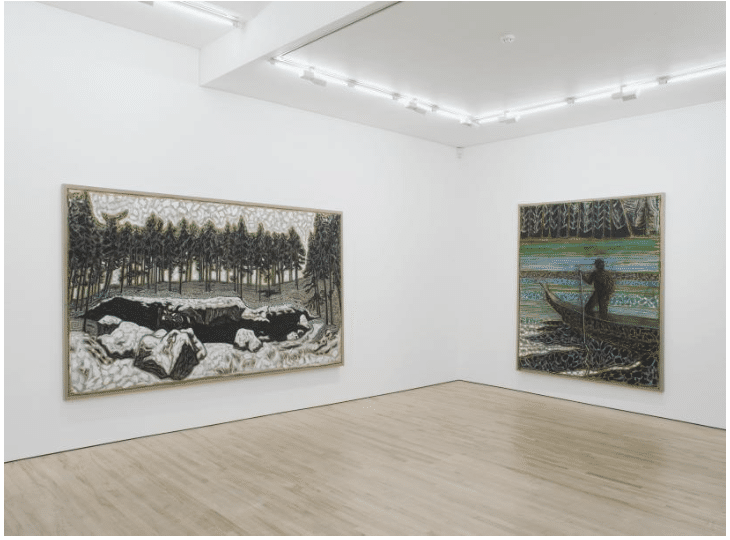 Billy Childish is an artist who is as prolific in painting as he is in poetry, prose, and music, all of which coalesce to form a coherent body of work that would take most people four lifetimes to create.

His work transcends the gossip about his character, be it his involvement with a prominent YBA or his short-lived membership of a certain art movement.

His work is created from a conceptually free mindset, and his work shuns the pretentiousness enacted by the more self-conscious. He believes that art should be autonomous and that the viewer must read each work as they see it.

On top of all of this, Billy Childish is one of the most genuine and well-mannered men I have ever had the pleasure of meeting. Below is the transcript of a conversation I had with him last year before his solo exhibition The House At Grass Valley at Carl Freedman Gallery.

BM – What relevance does the House at Grass Valley have, to both yourself and this body of work?

BC – Most of my paintings come from an immediate response to images, this was in response to a photograph of their house in Grass Valley California. My friend Johnny’s father built the house and I have visited there with my wife who is from California. My work is carried out very quickly, the response is very automatic. There’s little mental process, just this quick reaction – it’s how most of my work is undertaken. It’s not important that there is a real house Grass Valley. People might want to know the story but a painting is in another world that lives beyond the location. The ‘real’ almost becomes immaterial.

BM – Why did you choose to include the works of Russian Literature: Tolstoy, Dostoyevsky, and Gogol etc.?

BC – These people had a visceral engagement with life, and decent human integrity. I like people with moral depth and intelligence. All of these things are not bound in time; I believe a painting collapses time. That sounds grandiose in a way…

BM – You mean its universal?

BC – Yes, the paintings are difficult to place, you could place them anywhere in the last hundred years, but I would also counter that they are very modern. They acknowledge their history if you like, and wear their hearts on their sleeves. I declare my loves and celebrate my influences, which is something that artists used to do.

BM – I think the reason most artists these days are more reluctant to share their inspirations is because they are trying to claim that they have entirely original ideas.

BC – Yes, they want to pretend that they have invented everything themselves. We’re in this situation where art is tied to fashion. Art is almost trailing behind fashion, rather than leading from the front, so people are hugely worried about how to find themselves and how to be original rather than authentic. It’s very adolescent.

BM – A lot of artists don’t become relevant until long after they’ve died and society has had a chance to catch up.

BC – Absolutely, you can be so far ahead of the curve that you appear to be behind it – I’m one of those guys. It can be a problem if you’re career minded, but lucky for me I’m not. I paint the paintings that I want to paint when I want to paint them, I don’t do anything for an audience. There’s nothing more dated than the contemporary.

BM – Would you say you were an obsessive, is it a compulsion?

BM – A lot of your inspirations (Van Gogh, Dostoyevsky, Munch) make works about isolation. I see that same isolation in a lot of your work, be it painting, prose, poetry etc. Is that a concern or an inspiration for you?

BC – I suppose I have been trying to work out who I am and what that might mean, it takes lot of introspection. I was not given a lot of good information as a young man, and I come from quite a fractured background. I was finding maturity and a path through all of that. I now know the value of being here and the value of integrity, truth, and honesty. It’s taken a long while, and its not through my cleverness or my abilities, its through luck and grace.

BM – You had a tough upbringing in certain ways; do you believe that artists who have suffered some kind of hardship are naturally better artists?

BC – I think a lot of expression, and trying to understand the world can come from dysfunction. If somebody is burdened with suffering it can be a very valuable tool for them.

I’m sure art encourages mad men, and I’m sure it helps some mad men.

BM – So would you say that these works are more autonomous than your early works?

BC – I’m in them, but I don’t use the same piece of brain as I used to. The hand that drew in the caves is the hand that draws now, there’s no gap. It’s primal, because its unconscious and it’s beyond time. Beauty is highly underrated, and so is craft and aesthetic. I often say to people I don’t make art I make pictures; I leave art to the artists.

BM – That’s the opposite of what a lot of contemporary artists would say.

BC – That’s because I’m being sarcastic and in fact they’re not artists. If something needs to be in a gallery to be recognized as art, it very possibly isn’t.

But I would also say that a lot of conceptual art has devalued its own language through overuse. The same can be said of abstract art. It doesn’t mean that it didn’t have relevance or value but if you have a diet of only chocolate it makes you sick.

Society and art are all so diabolically mundane because it is very easy to big up rubbish and very easy to dismiss the real. Very few people can tell the difference. But the real will always survive and will eventually raise itself to the surface in good time.

When I talk about this stuff people think what a dark view, but I have a total optimism in this.

BM – Do you think that the art world nowadays is too celebrity-focused?

BC – Society is obsessed with celebrity, and there’s no reason why art would be excluded from that. It’s that adolescent trend, the decadence of the world we live in. The art world personifies that decadence. It’s all greed; greed is borne of a lack of confidence, and a lack of spiritual belief. It’s not because these people are bad but that they lack self-confidence. We feel that we’re in competition with each other, and that’s because we’re a spiritually bankrupt decadent society. But truth and goodness will always survive.

BM – A lot of your work is quite melancholy, would you agree?

BC – Melancholy is underrated; there is a very melancholic feel to the world. A lot of people misunderstand melancholy; in a way it can be an introspective and calm place. It’s not going to obliterate you, it just tones everything down – its not misery. We’re such a mixed bag of emotions, and we have to understand that we live beyond them. There are a lot of quite dark things in my poetry because one of my favorite things is a black humor. Often people are surprised that I’m quite lighthearted.

BM – Do you think that for you your work is a way of excising some past demons?

BC – I think it does happen, it’s all tied into this existential feeling of being lost and alone without god.

It doesn’t matter where the problem is it’s just how much you identify with it. And being able to not identify with those aspects of ourselves, just recognize them. The ones who find it difficult are the ones who get stuck in identifying themselves as a particular aspect or qualification; they become defined by events that have happened to them, or their abilities.

The things we are always looking for is freedom, either by controlling others or by greed and money and power. But we’re seeking what we already have, and causing mischief for others in the process by looking in the wrong places. It stems from a lack of confidence in ourselves and a lack of self-awareness. One of the main jobs in life is loving yourself; you don’t have to become some kind of saint, you just have to have the guts to get to know yourself, and realize that your problems and defects are perfectly ok.

(Originally published in This Is Tomorrow Magazine)