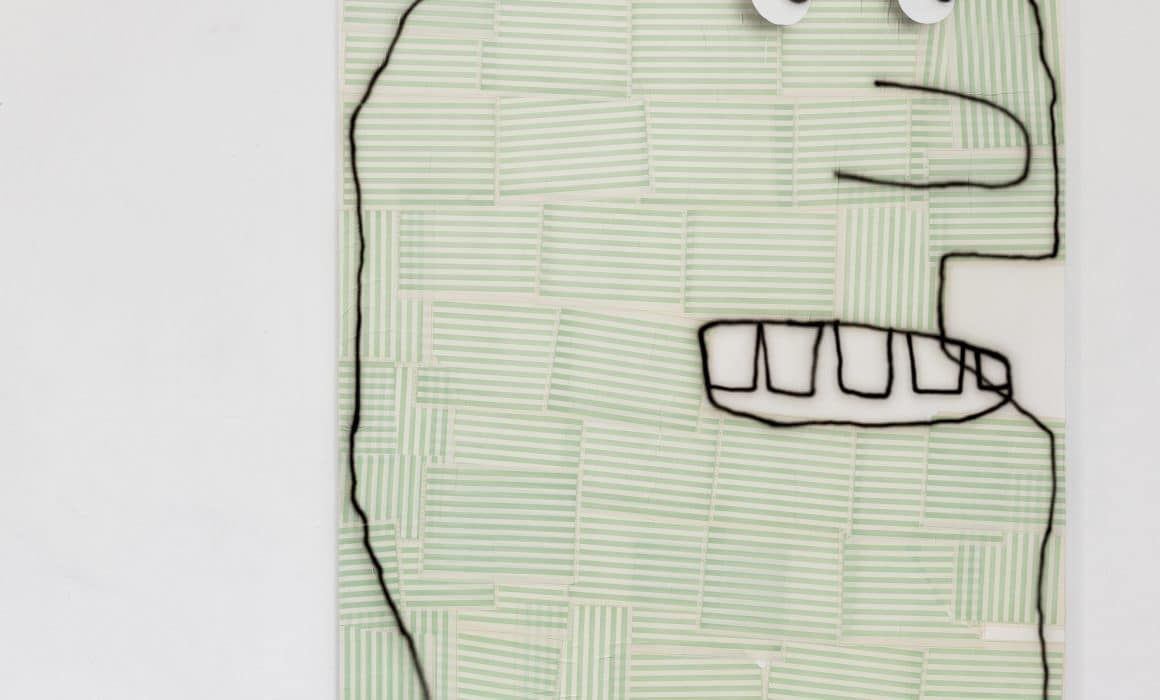 Taylor White is an artist who’s paintings are a visual record of his violently-unique character. Sitting somewhere in between gestural abstraction and hard-edged formalism (with the odd bit of representation), his works are an overload of perfectly-ordered chaos. His online persona feeds into this entropic aura that surrounds his works, and it is impossible not to see the joy he has both in his work and life. I decided to have a little chat with him about his work, because scrolling through his Instagram was such an entertaining, and inspiring experience, that I couldn’t help but try to find out more.

The statement that he has about his work on his website is a perfect example of what I have tried to elucidate above, and for this reason I have decided to include it verbatim.

My work gives form to fleeting memories and the dormant mania crawling beneath the carpet of the western home. These images recount crisis and triumph, momentum and confinement, lust and low-altitude bombing. Finding stillness in the recording of arguments within the process of painting and drawing, I return to my childhood freezer filled with popsicles and secret passageways.

Benjamin Murphy – Firstly, why are you an artist? Taylor A White – I don’t think I could enjoy my life if I wasn’t making art on a near constant basis. It’s something I seriously have to do to be able to sleep at night. I didn’t get really serious with it until I was 35 (I’m 40 now) and it totally took over my life. It was something that I returned to after spending my 20’s in the military, and it sort of transported me to a place I remember from my childhood. Making art kind of re-wired me after the military, and it seriously changed my worldview and how I viewed myself. BM – Was it that you felt like you needed rewiring post-military service, and it was art that did that job, or was the rewiring an unexpected thing that happened because you’d started painting? TAW – The shift in my thinking (or re-wiring) really happened unexpectedly. I started going to college for Psychology (mainly because I didn’t know what to go to college for, and it sounded responsible, lol) and I eventually took an elective art class which was the intro class you had to take before you could take the other classes. I was immediately hooked, as soon as I smelled the inside of the art department, I knew I’d found the place I was supposed to be. BM – Wow. I actually went to art school because I didn’t know what else to do, so it’s funny that you came to the same destination from the opposite direction.  So do you think that painting is something you could have very easily not discovered? TAW – Oh definitely. I actually almost quit the first painting class because I became so annoyed with my inability to do basic things painting things like creating a gradation between two colors. I was frustrated that it did not have the directness and speed of drawing, I was just pushing this hard to control goop around and it wasn’t satisfying. I had a great painting professor that really encouraged me to just draw with paint, and stop thinking about painting in such a rigid conventional way. 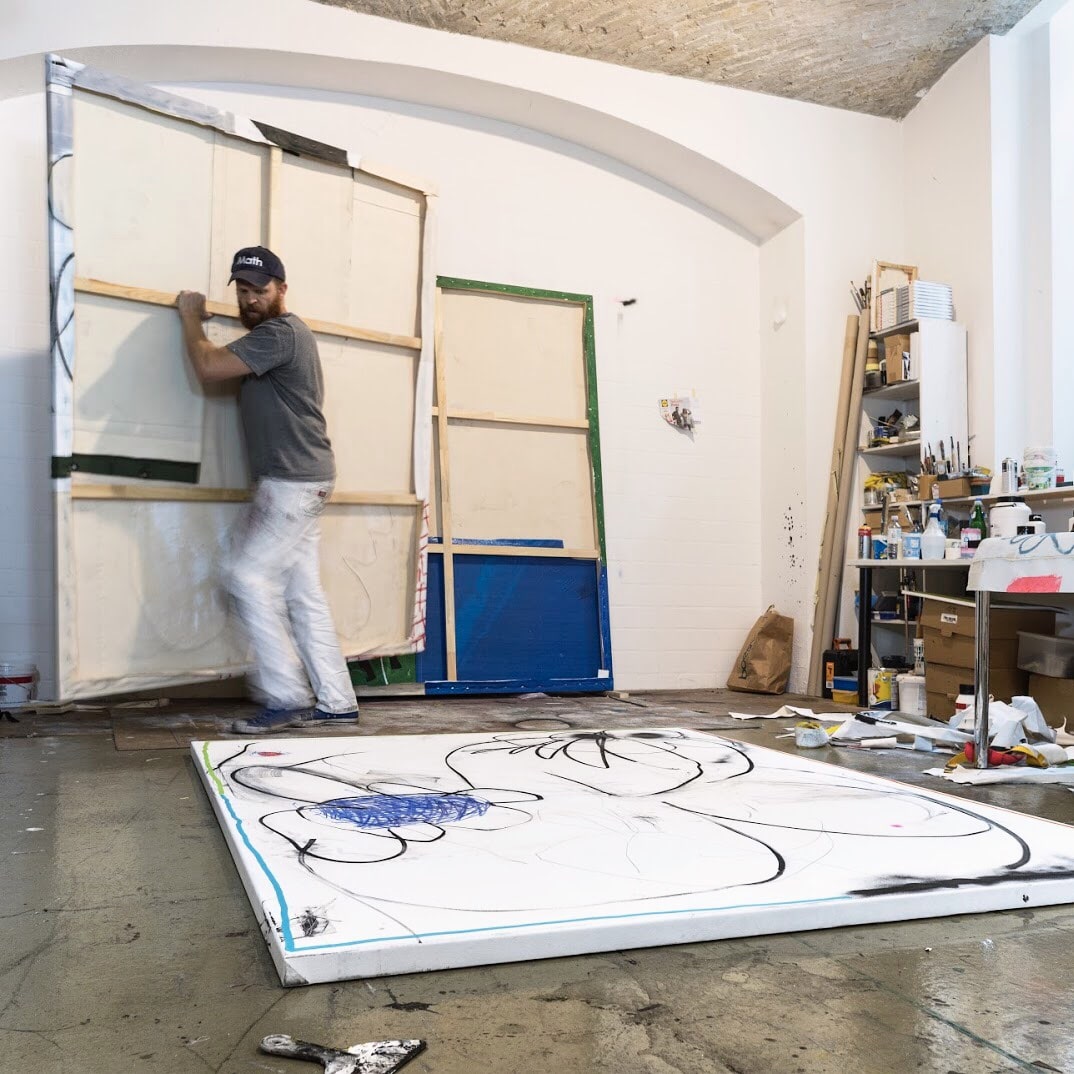 Taylor A White in his studio

BM – Do you think you could still quit now, or has painting become a part of who you are? TAW – Hahahaha no I could never quit, it would be like trying not to breathe. BM – That’s interesting, as you almost never found it. TAW – That’s true. I kinda stumbled into it and it immediately transported me back to my childhood. BM – Do you think you needed that? TAW – No, I didn’t realize I needed it at first, it kinda snuck up on me. 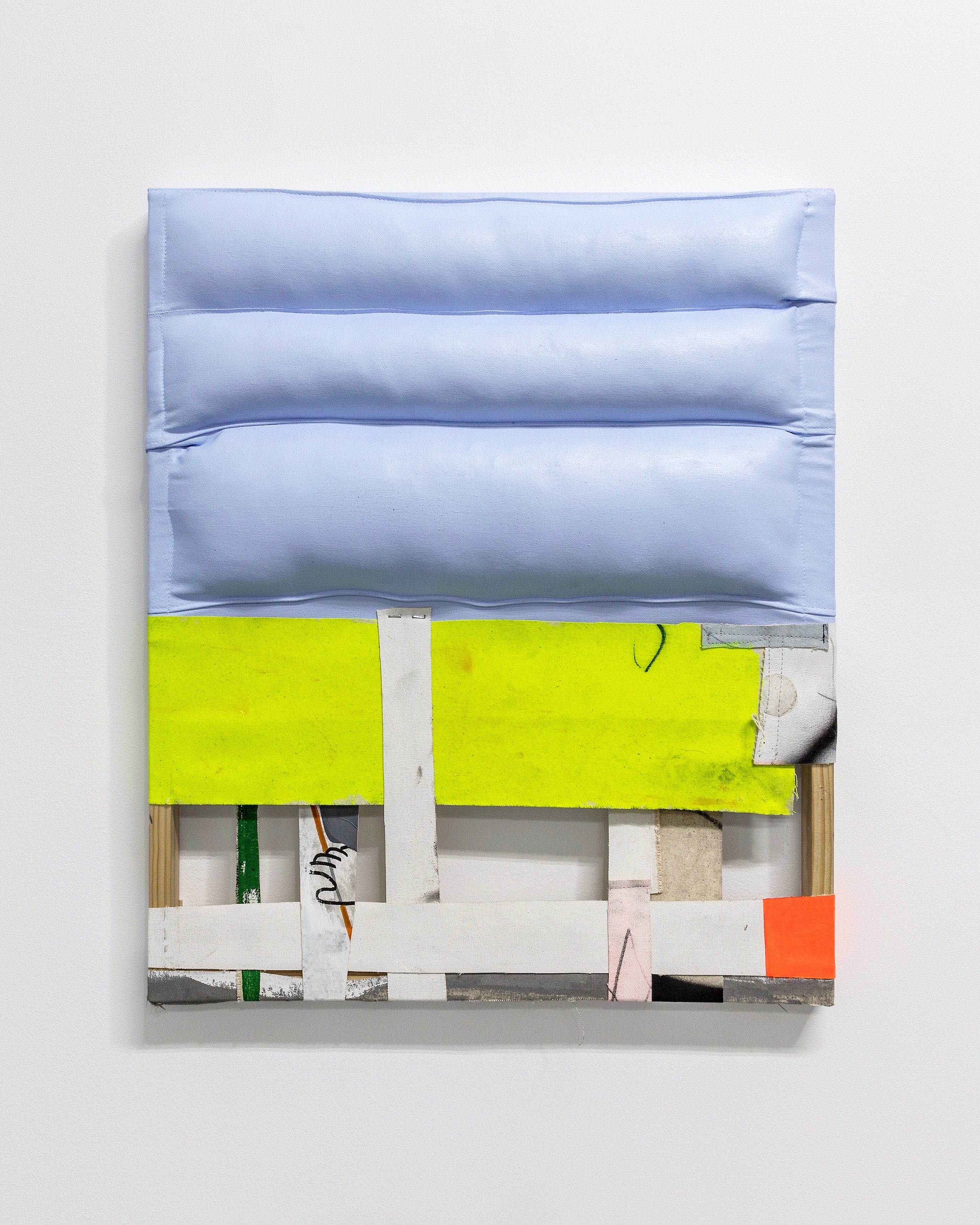 BM – What is your work about? TAW – I don’t ever intentionally make work about a specific subject, or try to direct viewers to see it in a certain way. Often I can overhear a segment of a conversation or something like that, and it sort of becomes a point of departure in a painting. I’m always interested in letting the work completely become unhinged from that initial prompt, and I never feel any obligation to circle back and force it to make sense, to resolve it BM – So how does it make you feel when you look at it afterwards, and are there any signifiers within the work that you can identify as being related to certain things? TAW – I generally don’t let a painting survive if it makes sense, I find it boring. Sometimes symbols and shapes that I draw are interpreted as specific signifiers for something, but they’re most often based on my immediate interest in drawing them. Sometimes that can result in something that maybe points to things happening in the subconscious l, but I’m comfortable with letting people interpret it however they’d like. I also had a great teacher that once told me “you’re saying more than you might think”. So I just kept going, firing from instinct and impulse. 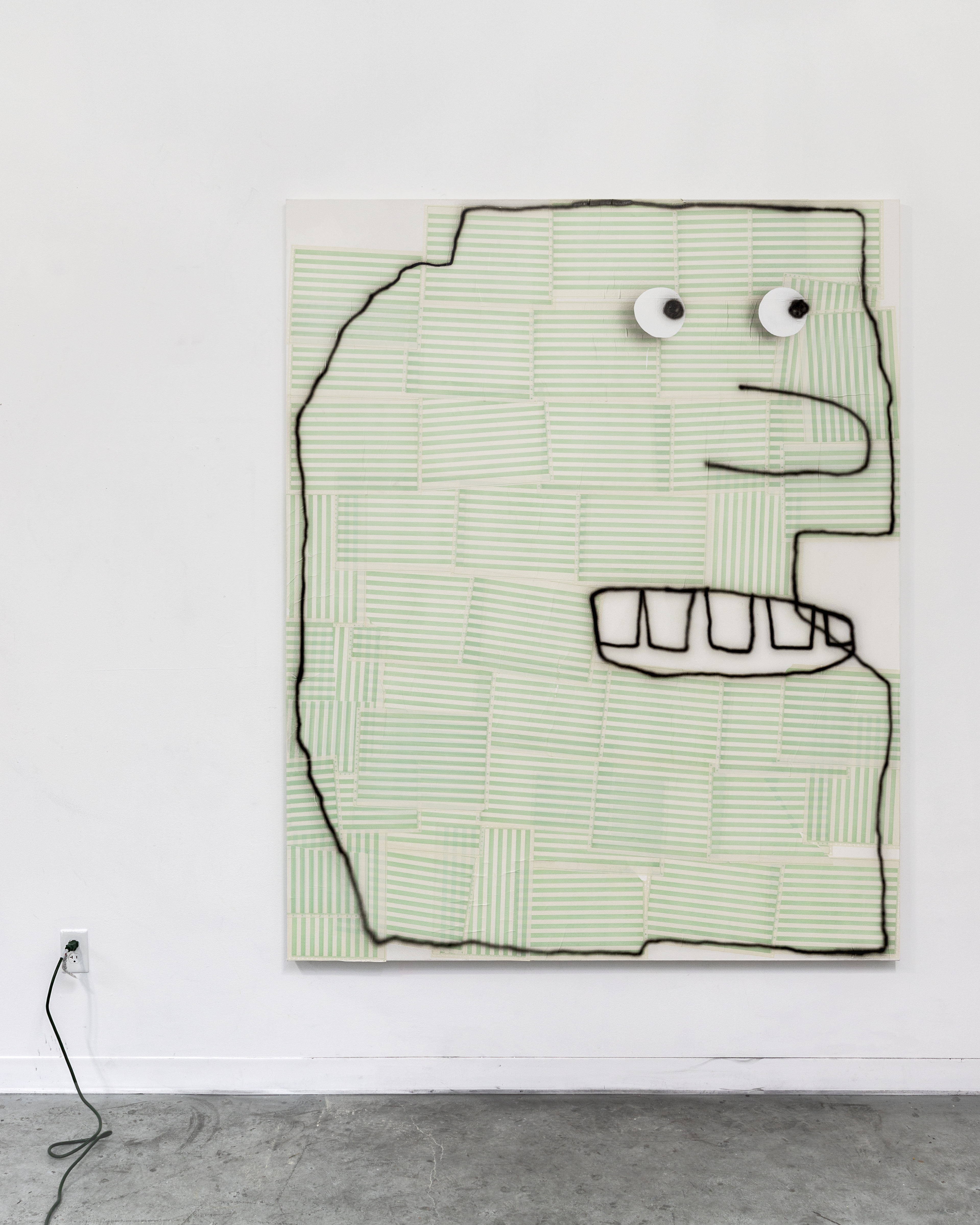 Maybe We Should be Kissing

BM – In general, do you think that the most successful artworks are those that are least didactic? JFK once said something along the lines of “Art is not propaganda, art is truth”, and I think it’s really apt. TAW – I’d say I agree with that. I’m definitely most interested in art that I immediately find confusing. BM – If you had unlimited time, money, space, what would be your dream project? TAW – Hmm, ok here’s one thing I’d do immediately: I’d like to tie or affix Matthew McConaughey to objects and only allow him to repeatedly say “Alright, alright, alright”. Like just imagine him doing that, placed sideways at the bottom of a huge painting. I love it. BM – Haha that is wild. I’m going to end this interview there, because there can be no better way to wrap one of these things up than with that image. So thank you. TAW – Thank you. 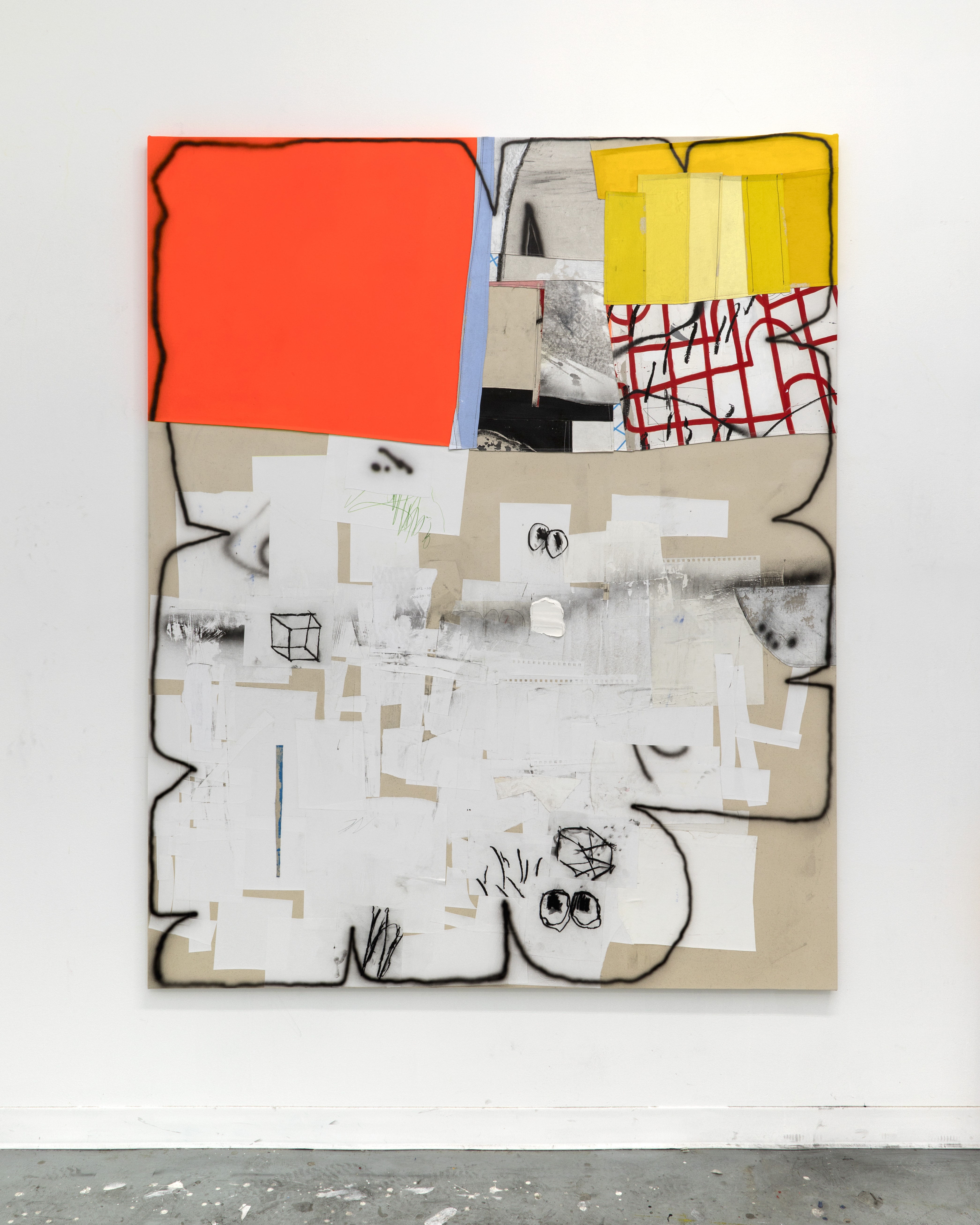